.ASIA as One of the First Wave of New gTLDs Goes Live with Chinese, Japanese & Korean IDN Registrations 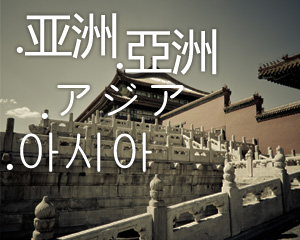 Hong Kong, 23 June 2012 – DotAsia is pleased to announce the successful “Go-Live” launch for Chinese, Japanese & Korean IDN (Internationalized Domain Name) registrations for the .Asia Top-Level Domain on June 21, 2012. Amidst the wave of new gTLDs being introduced, .Asia is the first new gTLD from Asia dedicated to the Asian community around the world. IDN .Asia registrations will be accepted on a First-Come-First-Served basis from Go Live (http://www.domains.asia).

According to research findings, it is estimated that Internet users will reach 2.2 billion by 2013, with Asia remaining the biggest global growth engine, and that 17% of the world’s online population will live in China in 2013.  “That means the majority of new Internet users will not speak English and will interact fully in their own native language,” adds Edmon Chung, CEO of the DotAsia Organisation. “Having a domain name that speaks their language will be critical to allow them to find you, especially considering the search engine optimization (SEO) benefits in capturing domain names matching keywords users are looking for.”

Hand in hand with the launch of CJK (Chinese, Japanese & Korean) IDN is the extension of the FreeB program (http://www.freeb.asia) to IDN .Asia registrations. Now, registrants of both ASCII and IDN .Asia names will receive free gifts exclusively from DotAsia:

The FreeB program from DotAsia highlights Asia’s continuation as the center of cool, bargain gadgets. “.Asia is the one domain that connects you to Asia, the largest and fastest growing Internet marketplace,” says Chung. “We believe that new gTLDs will bring new models to the domain market and DotAsia’s FreeB program represents one of the many innovations to come that could challenge existing mindsets and bring about new uses of domain names. For example, it would be exciting to see .Asia domain names being used on tablet PCs as central nodes for personal clouds.”